Of Death and Life

Of Death and Life

Twenty-one years ago my husband of twenty-five years was dying, paralyzed by metastasized brain cancer.

I stood at the open window of our bedroom on a glorious day in May, listening to the birds and looking at the nodding heads of daffodils and tulips. Waiting.

He was lying on the bed behind me, sleeping for the moment. My strong steadfast Marine was leaving, moment by moment. The ticking of the clock on the wall counted down his minutes. There was nothing more to be done.

I turned from the window to finish folding laundry on the trunk at the end of the bed. I heard kids outside laughing and shouting.

I looked back out the window and saw three boys, between nine and eleven years old, two with sticks, hitting the evergreen groundcover growing by the sidewalk in the front yard. They were poking the sticks into the shrubs, intently focused on what they were doing.

I raced down the stairs and out the front door, down the sidewalk and over to the boys.

“What are you doing?” I wanted to shout, but asked it pleasantly.

The boys hesitated. “We found a baby duck and we were taking it back to the creek,” one answered.

“We were just going to take it back,” the youngest said, a pouting whine in his voice.

They slouched down the street, whacking the pavement with their sticks and muttering about the “mean old lady”. Half a block away, they began to skip and run. I watched until they were gone.

Movement among the evergreen branches caught my glance. Leaning down close to the ground, I watched a tiny duckling trying to hide under the branches. “It’s ok baby. It’s ok,” I murmured. I slowly reached out and wrapped my fingers around the quivering little body. I picked it up and held it close against my chest.

I’ve been around a lot of baby birds. When I was growing up, Dad bought us baby chicks to raise and we grew out pheasant chicks for the state fish and game department to release in the state parks. My dad found a young mallard hen sitting in the middle of the road along his route home late one evening. He stopped, picked her up, put her on the passenger side floor and brought her home.

“Quackers” fit right in with Waddles, Doddles, and Toddles, our three Peking ducks. In the summer, we’d fill a wading pool with water that the ducks loved to bathe in. Quackers would take off and fly around the house, the blue bars on her wings flashed in the sun. She’d land in the wading pool with a huge spray of water. She never flew away.

I knew what to do. The baby needed warmth and food. I found a shoebox and put newspaper in the bottom and tore thin strips to make a nest and cover for the little one. A daughter was dispatched to the pet store to buy chicken feed. A shallow dish held water and another, the feed.

I held the little creature close to my heart many times over the next days, murmuring and petting. I took her in for my husband to see. He could not talk any more, but his eyes, those wonderful dark brown eyes, softened and tears ran. I lifted his hand and trailed his fingers over downy feathers.

I wasn’t sure that the baby would live. As my husband declined, the duckling grew stronger.

It took a week for my husband to leave. Stepping into the next life was hard work. Between one moment and the next he was gone: a breath away.

After the funeral and burial at our National Cemetery among the other heroes, and the gathering at home for friends and family, quiet descended on the house. The shelties needed care and the duckling, still alive, took time too.

My niece named her Peepers. I knew I couldn’t keep her. Her soft little churring sound when I fed her or held her pulled at my heart. I called Wild Birds Unlimited and asked them what I should do.

“There is a sanctuary for young ducks that the Wildlife Department runs. You can bring it here to the store and they will come and get it. We already have five.”

I wrestled with the decision for another week, but finally decided to let her live free. When I walked in with her, the lady was surprised. “Most babies that young don’t survive,” she said. “She’s bonded with you.” The baby was three weeks old.

So, I let her go. I kissed her and ran my fingers over her back one last time, put her in her box and handed her to the lady. 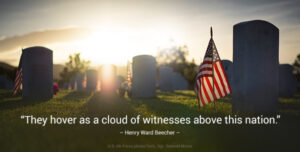 You would think that’s the end of the story.

Nine years later in June, I was on the phone, sitting on the front porch steps. I saw two mallards fly past the house and land across the street in the neighbor’s yard.

“Oh my gosh. I gotta go. The duck I saved has come back!”

I put the phone down and moved to a spot on the driveway behind the van. I sat down and started to talk to them. The female walked across the street and onto the driveway about two feet away. She looked at me and churred. I talked to her for about twenty minutes. The male, his green head glowing in the sun, slowly made his way to the driveway. He never got as close as she did, but he came. The bell at the school blared, signaling the end of the day. I slowly stood and told the mallards they needed to go. I walked toward them and they moved out to the street. “Go,” I said and raised my hand. “Thank you.” They took one last look, and flew away.

It was a remarkable moment. I’d often wondered if she’d survived. I was given the answer.

With profound gratitude, thanks to all who have gone before, who have served, and who are serving now.

On this Memorial Day, remember that with death, there is always life.